My name is Andreas Hoffmann, I have a doctorate in engineering, married, three children. Why did I get the idea to build a passive house? I think that people should take te opportunity to make more ecologically sustainable decisions, when the right moment is there, for example when you build a house. Today we live in a passive house and we are pleasantly surprised how beautifully all the components work together. I’m well aware of the many developments that brought improvements in the mean time. Anyway we are confident, that the reduction in the amount of energy we use each year really contributes to saving the environment because we don’t use any fossil fuels in our house. We chose a wood pellet heating and we need about one ton of wood pellets per year for 300 square metres. One ton of wood pellets is about 300 euros, that means we can heat our home with 1 Euro per square metre including warm water. I think it is not only ecological because we don’t use energy from coal fired or nuclear power plants and our energy comes from local forests, maybe a bit further than our forest, but local and not from far away like oil from Arab countries or gas from Russia.

What was your motivation, did you have a role model?

In the end of the 1990s zero energy buildings came up, that means buildings that produce at least as much energy as they use up. However that was too expensive for us a the time. So a passive house was the cheper and faster option for us.

How did passive houses develop since then?

You can get a good impression of the development when you take a look at websites about passive house projects, like passive.de, the website of Dr. Feist from Darmstadt. Our house ist number 78 on this page, as far as I recall. Today there are thousands of houses listed on this website. I think this is the future or zero-energy building and energy-return houses will outperform the passive houses. We planned 14 years ago and moved in 13 years ago, technology has developed a lot since and it has become more comfortable.

What would you do differently today?

Why do you have a swimming pool in your garden?

Yes we built a swimming pool and we struggled quite a while whether we should build one or not. Starting in May there is so much heat that the solar fluid boils regularly. The problem is that it becomes useless after it boiled a couple of times. Then you have to change it and that’s expensive. So we considered for a long time what to do with the excess heat. There is no way to store the heat in summer you know. At least not with the way our house is built. So we thought we use the heat to heat up water in the pool. It sounds like a luxury, but it was our way of leading away excess heat and now we are really happy with it.

How many of your friends and neighbours also have passive houses or solar systems?

I would love to tell you that there are many, but unfortunately there’s nobody. They looked for some energy standards and some friends of ours built a house according to the low energy standard of 2001/2002. But nobody also built a passive house, not one.

What do you think motivates to built a passive house or prevents them from doing so?

The costs are an obstacle. The prime costs are about 5 to 10 percent of building value. If you only have a certain budget that means your house will turn out smaller. I don’t mind small houses. Our house turned out a bit too big. On the other hand you don’t want to build a passive house doghouse. I think that’s what keeps many people from it. I say and my calculations from back then prove it, the investment has paid of after ten years with the lower energy costs. We pay about 300 euro per year for heat and warm water. The neighbours with about half the living space pay three to four times as much for gas. If you take the living space into account it would be eight to ten times as much. If you have to heat your house with 2500 to 3000 euros the investment pays off quickly. That was a motivation for me and my wife to invest in the future and the result we have today shows that we are right. 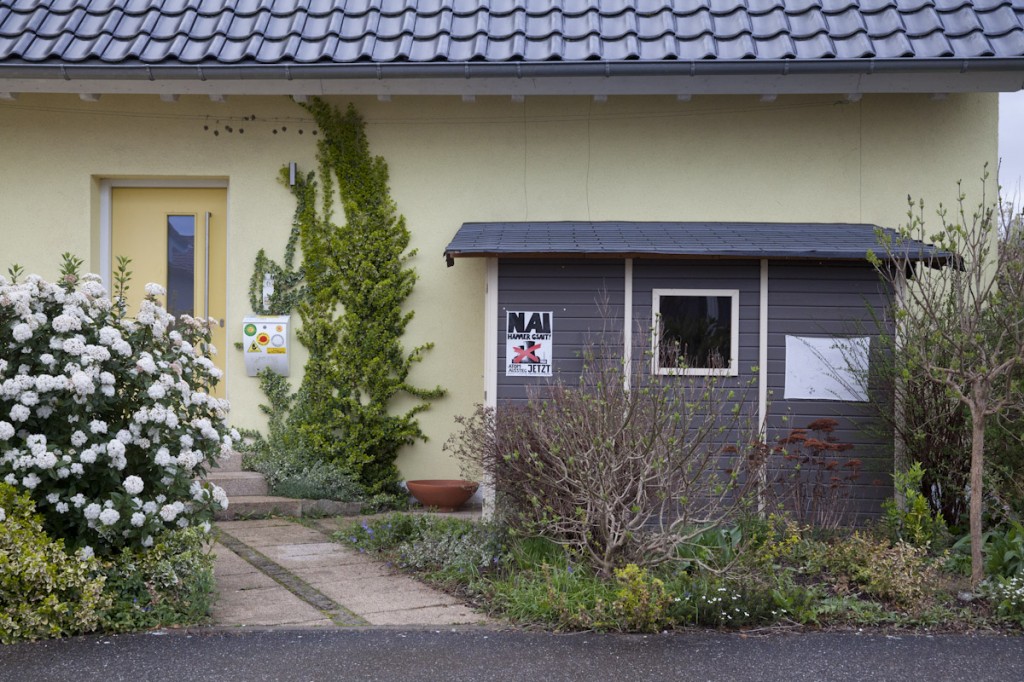 How is the return of investment now 13 years later?

We invested about 30 000 euros more than the building value for improved isolation, for controlled ventilation and for solar heating. The photovoltaic system we installed later. Every year we save about 2500 euros, that is 25 000 in ten years. Of course we had to take up a loan, but anyway considering that the price for gas and oil was a lot lower in 2001 that speed up the effect.

What will the new version of the Renewable Energy Law (EEG) mean for home owners like you?

Oh, that’s a complex question. We installed our photovoltaic system in 2004 with loans from the bank. Now people could say the Hoffmann family now earns a lot of money with the EEG allocation that everybody has to pay (it was 57.6 cent back then), but that is not the case, because the interest rates were higher. So the revenues went to the bank that gave us the loan. It was more our idealism to say we want to have a future, where we produce the energy that we use ourselves. We did not quite reach that goal, but we are close.
Citizens and home owners today, who won’t get enough feed-in remuneration to cover the costs, will consider if they can really afford to invest in decentralised energy supply. It is important to me as an engineer to say, that for every kilowatt hour from coal three times as much energy is used in the production than what comes out of the socket. One kilowatt hour in your home uses three kilowatt hours in the power plant. That is because of the effiency level of the power plant and the transmission losses.
Of course it is a problem for a private home owner who invests in sustainable energy supply if it doesn’t pay off. At some point of course the kilowatt hour will cost 40 or 50 cent, then it will make a lot of sense to use electricity that you produced yourself. However in this transitional phase now those who take the risk to install a solar system and produce their own energy should not have to pay more after a financing period of 10 to 20 years. When we built our solar system in 2004, when we still got 57,6 cent per kilowatt hour, it was not 100% sure yet it is possible to produce the predicted amount of energy in 10 or 15 years. And after ten years the performance is lower than in the beginning. We get about 5 to 10 percent less than in the initial phase. We carry the risk and we have to pay the same loan interest to bank, just the revenue decreases. It won’t get better with the new law. If you get back less money it will prevent more people from investing in renewable energies.

How would you change the political framework condition?

That is simple. Money is lying on the street. What counts for me is increasing the energy efficiency and saving energy. Every kilowatt hour that we don’t use is used well. So for example you can change your lights to LED. When I use energy for light at night or when the sun is not shining, it is even more important, even though light does not account for such a big part of the electricity bill. However power plants have to run at night because energy needs to be provided when the wind doesn’t blow ant the sun doesn’t shine. Looking at all these discussions about On- or Off-Shore or high voltage transmission lines, it would make more sense to invest in energy efficiency and saving energy. I just say that as an ecologist, I say that as an engineer who thinks ecologically and works economically.

What about your house makes you most proud?

We succeeded in building a house that is beautiful to live in today and despite all the prophets of doom it does not smell of cats and worn socks. Controlled ventilation is a comfort gain. I can recommend it for a large house like this. The electricity is from the EWS from Schönau, so it’s completely renewable. If you have a house like that you can really be proud of it because it works. That was not 100 percent certain in the beginning unfortunately.

One thought on “Andreas Hoffmann – Passive House Owner in Breisach”